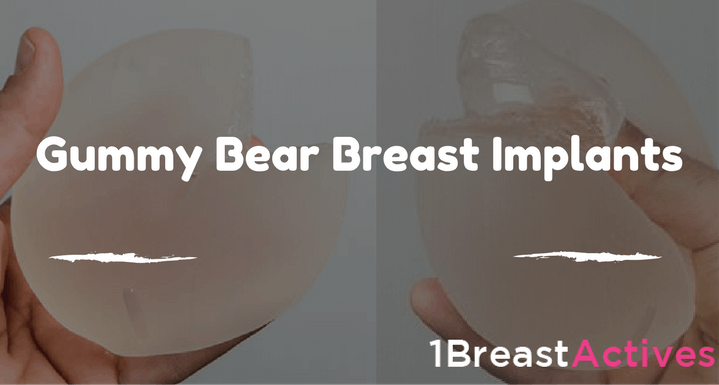 What is Gummy Bear Implant?

During breast augmentation surgery, an incision is made in the breast through which the implant is inserted. The implants are adjusted until they look even and perfect and then the skin is stretched over it, the nipple is relocated and some stitches later, you are done.

Gummy Bear Implant is a breast implant that is made from a special cohesive silicone gel that has revolutionized the world of breast augmentation. They are officially referred to as High Strength Silicone Gel Implants, and they are manufactured by a company that goes by the name of Sientra.

Gummy Bear Implants are safer than other implants and feel more natural than saline implants and silicone implants. They keep their shape even if cut into half and have less risk of rupture.

Why it is called Gummy Bear Implants?

A doctor in California actually named them Gummy Bear Implants because they are made up of a special type of cohesive silicone gel that retains its shape.

Even when cut in half, the implant stays in the same shape just like a gummy bear. That is the reason for this name. Even though the manufacturers have strictly distanced themselves from this name as they are saying that calling a breast implant by the name of a children’s candy trivializes it, this name has gone viral and everyone is calling it the Gummy Bear Implants.

People all over the world are researching Gummy Bear Implants and even ask the doctor for it. ‘I am thinking about getting the Gummy Bears’ has become a common phrase now.

Gummy Bear Implants cost a little more than ordinary, 4th generation silicone implants. The science is basically the same as 4th generation, just the internal gel has been made more cohesive so that it does not leak under any condition.

That is why they cost more than ordinary, 4th generation implants as they are improved and enhanced. The total cost would be about 7000 dollars, but since they are very reliable so there will be no follow up costs like repair or follow up surgery. Plus, these gummy bears look so beautiful, they are definitely worth it. 7000 dollars is a little cost to pay for greater confidence, self-esteem and beauty and they have very low chance of breaking. Especially for single mothers who have been breast feeding their children could really use gummy bear implants to rejuvenate and revitalize their breasts.

Gummy Bear Implants are the 5th generation of implants.

Let us see how they weigh up against the 4th and 3rd generations of breast implants.

The third generation was the saline implants. These consisted of silicone pouches into which saline solution was pumped and it was sealed before surgery. During surgery a small incision was placed in the breasts and the implants were pushed in. Although this achieved the right shape and size, many women complained that the implants felt watery under their skin which was an uncomfortable feeling. Also the silicone pouches were prone to rupture and leaking on impact, which would make the breasts deflate and the surgery had to be redone.

The fourth generation implants consisted of silicone pouches filled with silicone gel that was cohesive. Thus the watery feeling under the skin was eliminated for superior comfort. Even though they were better than the 3rd generation in many regards, the problem was incision size. Since they were not filled with liquid like the 3rd generation implants, they could not be pushed in through a small incision. Thus a large incision had to be made which means that surgery would be more invasive and there would be more post operation requirements. The gel could also leak out if the pouch burst.

Along came the Gummy Bears, the so called fifth generation of breast implants. These are almost the same as the 4th generation except that they have high strength shells and very highly cohesive internal gel, in fact it is so cohesive that it does not flow out even when the implant is cut in half. Thus they are better than previous generations as they eliminate the problems of the previous generations. In fact many women who have had 3rd or 4th generation implants are having their breasts redone with Gummy Bears. Although the surgical incision is supposed to be bigger than

Are "Gummy Bear" Implants Approved by the FDA?

The Gummy Bear Implants have recently been approved by the Food and Drug Association of the United States of America thus guarantying that they are not a sham and they are safe up to a reasonable limit as set in the law. The FDA has very strict guidelines according to which they decide whether something gets approved or not, so if they do approve something you can be sure that it is safe up to a reasonable limit and you can try it without fear.

How do Gummy Bear Implants Give Good Result?

It is dangerous to get gummy bear implants?

It is always a little dangerous to tamper around with your body as all surgeries carry risks.

There are various advantages of using gummy bear implants in the breast augmentation surgery.

However, there are certain cons of gummy bear implants too which are mentioned below:

How to Choose the Right Breast Implants

Every woman has a certain aim in her mind before she opts for a breast implant. The aim is the transformation of breasts as per requirement. Now, when you know how you wish your breasts to be, the second step is to choose the best breast implant. Following are the things that determine the best implant:

The best thing to do is see a doctor who is breast augmentation expert. The doctor will determine the best breast implant for you based on following factors.

2- Size and shape of body

4- How much are the current breasts sagged?

The doctor may also measure your height, weight and the size of your breast and chest. Through these measurements, the doctor will be able to determine the best implant for you. This method is known as the dimensional breast augmentation and it is one of the most effective ways to determine best implant.

You should first see the different samples of different implants that the doctor recommends for your body. See them and determine which one from them will feel the best on you and how will you want to look after your breast augmentation surgery. In this way, you will get the idea of what breast implant you desire to have.

While you check out the different breast augmentation samples, you can also request the doctor to perform a 3D simulation so that you can clearly see your appearance after a breast surgery.

If you really have to get breast implants, then the fifth generation High Strength Silicone Gel Implants, or the Gummy Bears are your best option. They are the latest in the world of breast augmentation. They feel natural, are less risky and there would not be any complications. Gummy Bears will make you feel good.

The Breast How was founded with one goal: “Breast Health Care”. We work towards this goal by providing education, resources and solutions to the women who cares. Join community to get updates.